Diamonds in the Rough: The vintage, mid century modern variety. 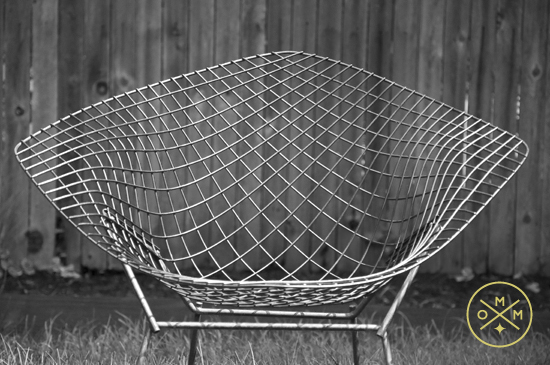 This is a bit of a past meets present post. A few months back, I was driving around the city while K was away for the weekend. At the time, I had been in another small slump as far as finding anything of substance. I had visited all the normal haunts and even resorted to stopping by a few garage sales, but it looked like I was destined to have another fruitless hunt. I had just decided to give up and head back home when I happened to spot something out of the corner of my eye in the backyard of an unkempt house. I couldn't be sure, but I suspected I had seen a potential treasure.


As I'm sure you can tell by now, that suspected treasure appeared to be a Bertoia Diamond lounge chair.  In an effort to confirm my suspicion, I hit the brakes and turned around at the nearest street. I strolled by the home slowly this time and was pleased to see that there was in fact a diamond chair buried in a yard of tall grass and random junk.

Normally, things would have ended there. I spotted it, I confirmed it but it was in someone's yard and therefore off limits, right? Well, not really. I know there are plenty of people who see situations like this and are completely fine with just marching right up to the front door and asking if the item they saw can be had. That is generally not me. I've never been a fan of approaching total strangers, especially when I'm in an area of town I'm not overly familiar with other than the fact that it can be dangerous if you aren't careful. So there was my dilemma. I had spotted what could be an original Knoll Bertoia Diamond chair wasting away in someone's yard but in order to save it, I had to take the risk of approaching complete strangers in a bit of a rough neighborhood. I weighed my options and finally decided to give it a go.

After ringing the door bell and knocking a few times it looked like my inquiry was going to go unanswered. I had just turned to walk away when I heard the door creak open behind me. Not knowing what the protocol is in a situation like this, I tried to explain that I wasn't peddling anything and instead had an odd request. I told the person at the door about my interest in the chair and that I wondered whether they would consider selling it. They seemed puzzled that anyone would be interested in the chair and said they would be happy to get it out of their yard. Score.

On the way to the backyard to claim my find, the owner asked if I wanted the other chair too. Other chair? What's this other chair you speak of? It was in fact ANOTHER diamond chair! This one was also tipped over and laying amongst a pile of junk. Now, let me be clear that both of these chairs have a bit of damage, one more so than the other, but I couldn't just leave them behind. The owner didn't want them and was only asking for a couple bucks each so I said sure. I paid the man and gave him a little extra for being cool with me interrupting their afternoon and headed home with my chairs in tow. 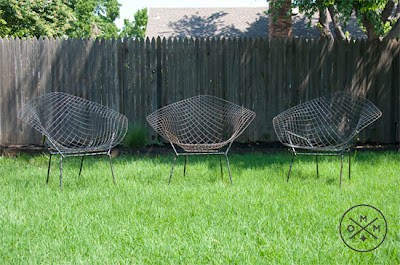 That story covers the past so now let's fast-forward to the present. Yesterday I was heading home from work and thought I would stop by a couple local thrifts. I've got a number of projects waiting for me at the house so I certainly wasn't in need of anything new, but I thought I'd at least check to see if anything worth while was available. After taking a look at a few Mersman end tables, I spotted what looked to be another diamond chair at the back of the shop. I wandered through the various chairs, sofas and tables and was happy to see that it was in fact another Bertoia. This one was in much better shape than the two from my past experience. It has a bit of light rusting on few spots, but all in all is in good solid shape. I quickly snatched it up and headed to pay for it. While paying I asked if by chance there were any more like it that hadn't been brought out to the floor yet, but was disappointed to learn this was the only one there. Oh well, I was able to add another chair to my collection and was one step closer to a set of four.

As I mentioned before, we've had the first pair of chairs for a few months now and am still trying to figure out what the best route would be to repair them. There are a few broken welds and someone has bent one of the wires down and under the chair. It needs to be straightened and reattached, but since I don't have much experience with what can and cannot be done with this type of chair, I'm a bit clueless on what my options are. Any of you MODerators have advice on what can be done to remedy the abuse my poor chairs endured?
Posted by OH MY MOD at 6:22 PM