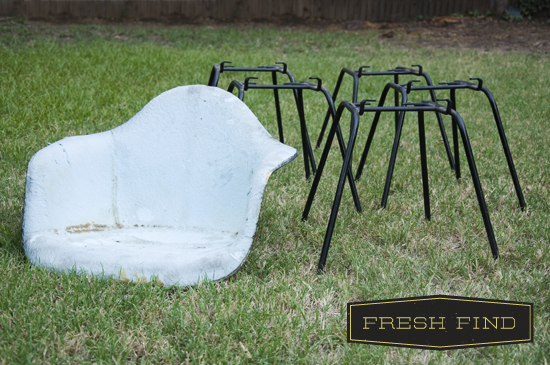 We've mentioned in recent posts that things have been rather hectic for us lately. Between work and deciding on how to handle certain momentous house projects (not the fun kind), we haven't been able to spend as much time on the blog as we would like. The lack of time obviously limited our ability to work on existing projects and search for pieces that would benefit us or other mid century furniture and design lovers. The latter meaning that there has been no time for garage sales, estate sales or Craigslist. Until today.

Because time has been limited and because we have accumulated far more furniture than I ever expected, I have been avoiding the likes of Craigslist. It took some time to get used to not frequenting the site daily, but I handled the withdrawals and have lived a relatively normal life since. I decided today that I would take a gander to see if anything worthwhile was about. I went through my usual routine and was pleasantly surprised to see a listing for some Herman Miller shell chair bases. The best thing about this post? They were absolutely free.

Those of you who search for mid century pieces like I do know that free items are generally hard to come by. You have to be quick to notice the postings and even quicker to get to the actual pieces. This listing was done overnight and I slept in a bit later than usual, so I figured my chances were slim to nil. Despite this, K and I jumped in the car and made the journey across town to check out the situation. To my surprise, the goods were still there. Not only the bases, but a shell chair in pretty bad condition was left by their side. Bonus. I nabbed the bases and the shell and tossed 'em in the back of the CR-V. I was tempted to also load up the three-seat bench bases that were there, but K reminded me that we had enough junk around the house and it was better to leave them behind. Good call. (If any Tulsans are looking for a bench base, drop me a line and I'll be happy to pass you the address. Who knows, maybe they're still there.)

As mentioned in a previous post, I have plans for my home office and they include a couple of shell chairs. Picking up the bases gave me half of what I need, so now it's a matter of finding the right shells to pair them with. Though this morning's shell is in pretty rough condition (upholstery gone and some poor patching done on the outside of the shell) I  figured it was worth taking even if it didn't make it into the office.

All in all it was a good morning today and a good way to whet my appetite for the hunt again.