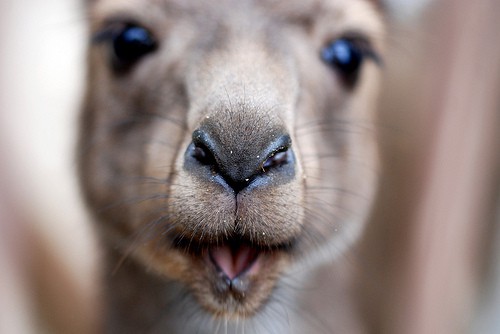 When we first started our blog an ingenious friend suggested that we ask people to write guest posts periodically. Since all of our friends are complete slackers, though, one of them has just now gotten around to actually taking us up on the offer. However, as I think you'll see, the wait may just have been worth it. L and I are psyched to present to you our friend Derek's thoughts on the perils of packing and the ridiculous amounts of things that we not only accumulate in the first place, but also insist upon dragging everywhere with us and keeping for forever and ever. L and I went through this when we moved to Edinburgh three years ago and again when we moved back to the states, so Derek's words are laughably similar to our own experiences. While we had managed to downsize our possessions significantly out of sheer necessity (stupid airlines and their baggage limitations), we've somehow managed to accumulate enough things over the past two years to make us think our 1,800 square feet house isn't quite big enough anymore. And this is from two people who had been living in less than 500 square feet with room for gymnastics. So, with that said, we hope you enjoy Derek's musings. He's planning on blogging throughout his year in Austria (or is it Australia?), so if he says anything noteworthy, we may see if we can pirate it as our own thoughts. Ha!


Have you ever tried to downsize your closet to a degree that it will fit into one
suitcase but still last you for almost a year? Oh, the blood, sweat and tears. Really, it
would probably be easier to give up everything now, take a vow of silence, and move
into a monastery, or to just cure cancer.

I don’t have that much stuff, or at least it didn’t feel like I did, before I started this
project. When I finished school and moved out of the rental house I lived in as a
student, I got rid of roughly half of my belongings. But that left so. Much. Stuff. Pack-
ratism runs in my blood, and I’ve always made a conscious effort to try to avoid it.
Shows like Hoarders on TLC give me anxiety attacks. It just looks like such a slippery
slope…

When you’re 22 and graduate from college in 2011, you’re overqualified for every
job you can get, and under qualified for every job you want. That leaves 2 choices:
stay in school, or move to another country. The latter of these two might sound
drastic, but consider:
Now, I’ve always wanted to spend some time living in Europe. Like, since I was 13,
I distinctly remember picturing myself as an ex-pat, drinking coffee in some street
café, and lamenting the lack of job options for me back in the States. Now that that is
rapidly becoming my reality, I have to applaud that little boy with so much foresight.

But before you can order that Viennese coffee, you have to pack. Some people
(everyone) might say you should start by making lists. I’m not a list person, but I
have nothing against them. In fact, I’ve been known to make a list or two in the past,
but for me the list-making pretty much runs out after the highly thought-out guest
lists I’m good at creating.

No, I say that even if you are the list-making type, the best place to start is by selling
your bed and dumping everything out onto the floor where your bed used to be.
Then you can at least see it all.

After that, piles become more important than they’ve ever been in your life. Not
piles like, “Is it okay to put this red sweater in the same load of laundry as these awesome white pants I just bought?” (no, it’s not), but piles like “Why did I ever buy
this?,” “What is this?” and “I absolutely must have this in my life.”

For example, here is a pile of things that I don’t know why I own:


Nevertheless, They’re going into boxes. Because I might need them in the future?
No, because the consumerism that has made this country great tells me that I need
them. I may be leaving the country, but I’m not a Communist. I need these things.
I’ll sleep better at night knowing that they’ll be in boxes in a basement in Oklahoma
City, and that when I come back to the United States I can get them, and move them
to a basement of my very own, without ever having to open the boxes. Because who
cares what’s in them, really? As long as you can say you have “stuff.”

Here are more things that are going into boxes:

Pay no attention to the frilly curtains and flowery wallpaper. I didn’t decorate this
room. Some lesbian did.

A lot of the things on this side of the room are books and things like that, which I
will probably want to actually take back out of boxes one day. You may say that it
doesn’t look like that much stuff, but remember, I’ve already been through one very
painful round of downsizing.

Now, here’s where it starts to get ugly. This is my “I need this stuff” pile: 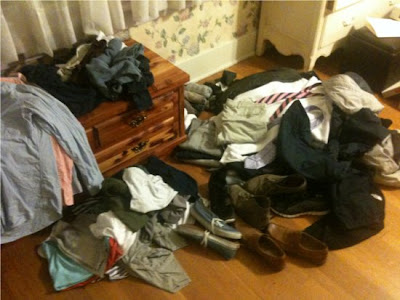 As you can probably tell, despite the low quality of the photograph, this is too much
stuff for one suitcase.

But this is my problem: If I had made a list, these are all things that would have been
on it:

I also want to bring two neckties, because a former fraternity man can never be
caught in a situation without one, but also can’t wear the same one twice in a row.
How would that look in my Facebook photo albums? Like I didn’t know what I was
doing, that’s how.

Neckties mean you need a blazer. That takes up space in a suitcase. Fortunately,
pants were already a pre-considered part of this equation, so no extra space taken up there. And now I don’t need to waste space on a suit! See what I’m doing here?
Ahhhhh, that’s right.

I can probably afford to only take 2 of the 4 pairs of pants I threw into this pile.
Eh, maybe 3. Twist my arm. I took about 6 pairs of pants when I spent 5 months in
Germany once, and that was 5 pairs too many. I wore the same pair of jeans every
day. And no one even said anything about it. Europeans are weird like that.

I also don’t think I actually need 5 jackets. 2 will probably do. I’ll have to take the
2 most versatile, though, which is going to be hard to determine. This is going to
require a fashion show, with my roommate playing the part of Tyra Banks.

Socks and underwear are non-negotiable, but I can definitely cut down on the T-
shirts. When will I even wear them, really, except for layering? Like I said, it’s cold
where I’m going.

That only leaves things like electronics, medications, and toiletries. This is where
lists become really important again. Because in Austria you can’t find all of the
toiletries that we use in America. These people are descended from barbarians,
remember. For some reason they don’t want to smell like chemicals all of the time.

There are also lots of errands to run, driver’s licenses to renew, speeding tickets
to pay, and friends to bid adieu. But that stuff happens naturally, and I’ve found
them to be worth far less stress than I’ve given them. Eventually it’s just time to get
on a plane, cut your losses, accept what didn’t get finished, and settle in for a long
flight, resting peacefully knowing that you still have a life hidden in a basement in
Oklahoma City, waiting to be reclaimed.

Lead photo via Pinterest.
Posted by OH MY MOD at 4:32 PM