A Haggis in Oklahoma 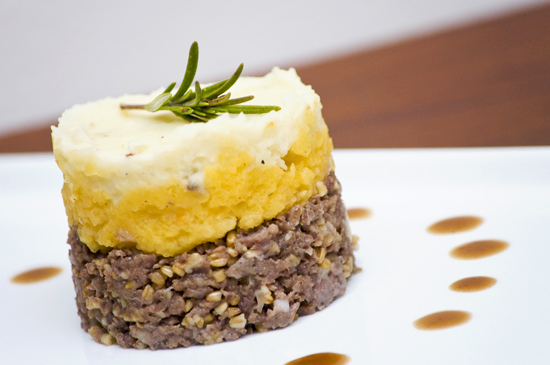 It's been a crazy busy month for us, so we're just now getting to tell you about one of our most exciting activities during the month of February. What was that you ask? Skydiving? A two week vacation to Hawaii? Nope - haggis. Making haggis, that is. Or, as I should note, a very Americanized haggis. Ever since moving back to the states in 2009, and going back to visit last March, we've been dreaming of our favorite Scottish dish and telling ourselves we would make it some day. So, as Burns Night 2012 approached, we pulled out the old Google, ran a search for recipes and local butchers, and realized Americans are the pickiest eaters ever. 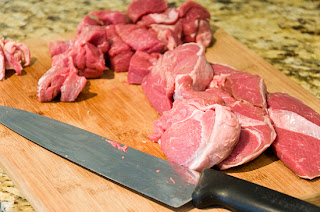 When we first started talking about making our very own haggis, we had grandiose plans to talk friends and family into donating the necessary ingredients (lungs, heart, and liver) during deer season. We had watched several Youtube videos on making haggis and had read that venison was actually a great alternative to lamb, so we were psyched at the opportunity. Long story short, this just didn't happen. So, as Robbie Burns's birthday quickly approached, I started making phone calls. The result? Sheer hilarity. The consensus from nearly all of the butchers we contacted was an assumption that we were making our own dog food. Yes, dog food. Somehow Americans will cram themselves full of untold amounts of ridiculously unhealthy processed foods, but when you ask for an oft-discarded cut of meat, people are disgusted and convinced only a dog will eat what you're ordering (also, the FDA frowns upon - meaning it's illegal - the sale and/or purchase of lungs). 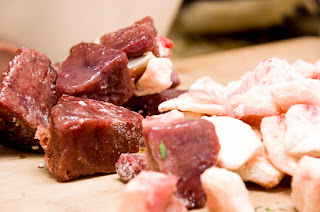 So, as time wore down and our anticipated dinner neared, we settled on utilizing a bit of extra liver and a boneless leg of lamb for the remaining meat. Luckily, we were able to find one ingredient that was crucial to our haggis' deliciousness: suet. Funnily enough, the butcher said their only suet came in "with the dog bones," but we were happy just to find this (for those of you wondering, suet is the fat found around the loins and kidneys - the white looking chunks in this photo are suet). I won't post the full recipe we used, but we settled on this "haggis for weak Americans" recipe from Chow.com. We eyed multiple recipes, including one from the Guardian that comes with a pictoral tutorial, but decided that this one incorporated ingredients from Scottish recipes (namely it specified that you really needed the suet), while still telling you how much meat you needed to substitute for the heart and lungs. 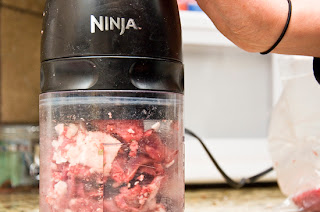 To get the texture we needed for our lovely haggis, we opted to go with using a food processor to grind our meat. I have a big Kitchenaid and we contemplated purchasing the meat grinder attachment, but I got busy and failed to order it online. We considered picking one up in town, but decided it would be too pricy for an item we probably wouldn't use very often. So, after a bit of research on the Google, we decided that we would go with something we would definitely use in the future. Somehow, this decision took us all across town and an entire afternoon before we finally decided to pick up the Ninja at Sam's. The version we snagged came with 4 different containers (including a pitcher!), so we were psyched at the options it provided us. 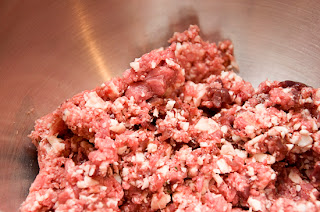 To turn chunks of meat into nicely ground bits, we put in equal parts lamb leg, liver, and suet into our handy new appliance and pulsed several times until we everything was ground evenly. We did this in multiple batches and then turned the ground meat into the Kitchenaid. Finally, we added in the remaining ingredients and mixed everything thoroughly using the paddle attachment (this allowed the oats, onions, spices, and broth to be incorporated into the ground meat).
Once we finally finished this process, we were once again reminded that we were in ridiculous America as we debated on how to cook a haggis without a casing. While we had tried to find something that would be suitable for this, we just didn't have any luck. So, we decided to put our mixture into a loaf pan, set it in a water bath, and cover it with tin foil to help create steam and keep things moist. I have to say we weren't terribly excited with this, but the results were still fairly delish. We still have a large chunk of our haggis mixture in the freezer, so we're hoping that we might be able to find a casing that is big enough and attempt to cook things properly. If that happens, we'll make sure to provide you with a status update - you know, because there are just TONS of people bashing their head up against the wall trying to figure out how to make a decent haggis in the states.
Now, realizing that this post is already extremely long, we should note that we also made vegetarian haggis! Also, we ordered a haggis online from Scottish Gourmet USA - such was the lack of confidence in our own haggis making abilities that we thought we should have a backup just in case! As a note, this haggis was pretty tasty, although it would have been better if we wouldn't have left it in just a bit too long. I won't bore you with an extended breakdown of our veggie haggis activities, but I will delight you with photos. And a recipe - this time, we decided to stick with the Guardian's recipe. The consensus? Equally delicious! (As a note, we went with the option to add an egg and bake the dish) So, in the end, while the process was a bit extensive and stressful, we had an amazing dinner that really brought back great memories. Other than buying turnips for our neeps, when we should have bought rutabaga (no worries, we made a quick dash back to Whole Foods), our Burns Supper was a lovely affair. 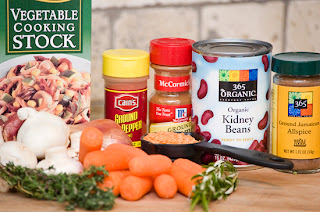 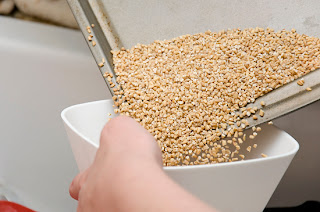 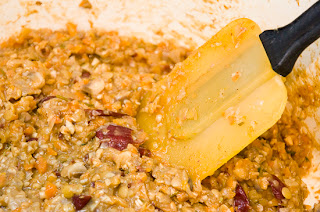