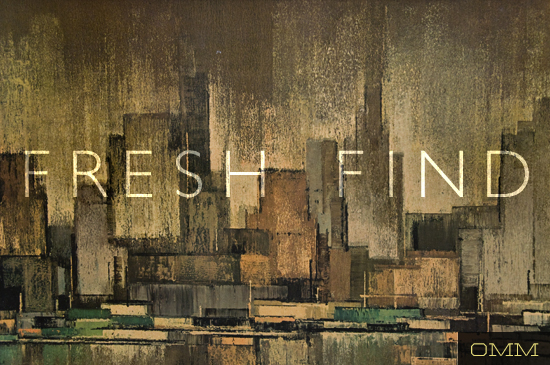 Let's keep things rolling by moving on to another recent find, shall we? Shortly after picking up our C. Jeré inspired bridge art, I came across a listing for a mid century inspired print of the New York City skyline. Mid Century and NYC? Say no more, I'm there. Well, kinda.


Under normal circumstances I would literally be there in no time flat. Like, as soon as I can find my keys kind of quick. I'm that addicted. Sad, I know. This however was not normal circumstances. You see, I normally restrict my search for things to Tulsa and nearby cities like Oklahoma City and Fayetteville. Given that I am an amateur collector/picker with a full-time job, I think this has served me pretty well as I've been able to furnish and style our home with an assortment of the mid century items I desire at a relatively low cost. But that doesn't mean I don't stray outside of my normal confines from time to time in hopes of coming across something special (like our swanky 1963 Zenith record console). Sometimes you need to head to more fertile mid century grounds than Oklahoma can offer. And I am by no means opposed to hitting the road for an item if it speaks to me. This framed print did just that. In fact, it wasn't just speaking. It was shouting BUY ME OR YOU'LL REGRET IT! So who am I to argue, right?
Normally, in situations like this I am well on my way towards the aforementioned car keys, but in this case, K kindly suggested that I let this one go due to the lateness of the day, distance to pick it up and the fact that we had other pre-scheduled projects/plans left to accomplish. I readied myself to argue my case, but quickly realized that I wasn't going to win this one. Drats. The once loud cries from the print were quickly fading and I headed back to my office with my head hung low. 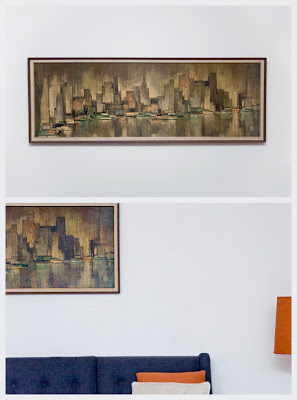 I continued to sulk for a few minutes until a thought sprung into my head that I couldn't believe I hadn't thought about from the moment I came across the listing. I had family in the city where the object of my desire resided! I headed back out to consult K and after receiving her blessing sent a quick message to my family members to give them the rundown on the situation.  After a bit of time and no response from my cousins, I decided to take measures into my own hands and call the seller of the item to see if I could make special arrangements for purchase. Upon speaking to the shopkeep, I explained my situation and asked if we could pay for the item over the phone and then arrange for pickup at a later date by either myself or a family member. Though he wouldn't take the phone payment, he did agree to set the print back until the end of business the following day in order to give me and my family member enough time to work things out. Fair enough.
Lucky for me, I didn't have to wait that long. During the time I was on the phone my cousin had responded to my plea and let me know he was on the case and would have it in hand shortly. All was well in the world of Oh My Mod. Or so it seemed.
While I had succeeded in grabbing the print from other potential buyers, I still had to figure out how to get it here to Tulsa. Mailing it turned out to be out of the question after we found out that he print was over 5 feet long and would have cost nearly $200 to pack and ship. Yikes. Ultimately, we decided that we would make the trip up at a later date to see the fam and pick up the print, which turned out to be a win-win situation since I hadn't seen them in a couple of years. Family and finds are a great combo, especially in this case since we also happened to pick up another item which is the biggest piece we've acquired to date. More on that later. 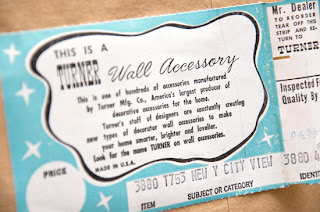 Back to the print. The piece was in great condition and had the original manufacturer sticker on the back of the frame. It revealed that this piece was a Turner Wall Accessory created by the Turner Manufacturing Company, America's largest producer of decorative accessories for the home. The retro print included the item number, subject and an assortment of other ordering information. This piece was titled "New Y City View" and was a print of an original painting created by MAIO. While I thoroughly enjoy the researching process associated with the things I find, I was a bit relieved to find all the information I need right on the back side of my most recent acquisition. 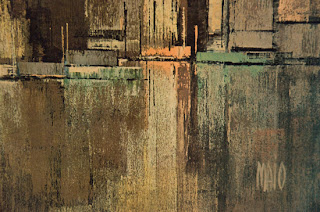 A decision on where to hang this piece didn't take long as it seemed to be a natural fit behind our giant, 9 foot long mid century sofa. After making measurements on the wall behind the sofa and attaching some wire to the back of the frame we had added our second piece of mid century artwork to our living area. We really love the subject, colors and style that this piece brings to the space. And to think, it almost didn't happen. Good thing it did though, as it gave us the opportunity to reunite with family and also pick up the other piece that was previously mentioned. And speaking of that piece, I'll go ahead and advise you that you should be jealous. Very, very  jealous. I know I would be.
Posted by OH MY MOD at 5:17 AM