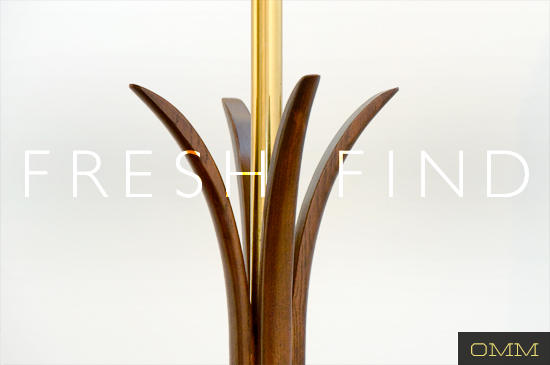 Quality mid century modern lighting solutions can be hard to come by. At least that seems to be the case for me. So, when I came across an ad for an upcoming estate sale containing a couple of mid century, danish inspired lamps right here in Tulsa I knew I had to act quick if I wanted a shot at picking them up for myself.

For the MODerators familiar with the blog and my thrifting habits, you already know that estate sales really aren't my thing. Craigslist and obscure little thrift stores are generally my stomping grounds so when I decided to hit this sale I couldn't help but feel a bit uneasy. This was uncharted territory for me. Sure I had been to a couple of sales late in their cycle and picked up some smalls, but this was first day high, high prices and groups of people who do this type of thing for a living. That can be a bit intimidating.

But, after seeing a couple of photos (one of which was the sweet lamp floor lamp this post is about) and reading the description of the other items up for sale, I felt I had to step out of my comfort zone and give this sale a shot. 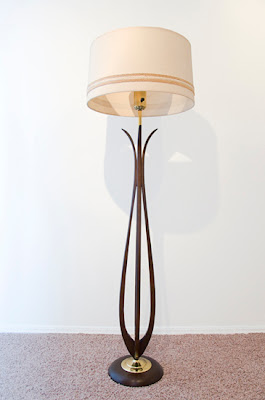 As I mentioned before, this sale had a pretty good assortment of items available. Various teak lamps, a Broyhill Saga china cabinet, a small danish dining set, a fantastic, walnut sunburst clock, a set of Lane coffee and end tables and much, much more. It was almost a dream come true. I say almost because I'm stingy with my cash and first prices at estate sales are way more than I generally will pay for something. You may say cheap, I say frugal.
Anyway, in order to ensure I had a fair shot at nabbing the aforementioned lamp, I woke up earlier than normal and arrived at the location about an hour before the sale. Mind you, I had to do this before work as well so my time was tight. Lucky for me, I was the first person to arrive. Score. This truly was luck, as it turns out that the sale was listed in a number of places, a couple of which had printed the wrong address. Tough luck for those peeps, but I'm not complaining.
Speaking of those individuals, there was quite an assortment of people who made it to this sale. They all seemed familiar with each other, so I'm sure they encounter each other on a daily or weekly basis and have come accustomed to the whole estate sale process. I, however, was obviously out of place and received a few stares and glares from the regulars as they each arrived to find me waiting patiently at the steps of the porch.
During the wait, I had a peek inside the window to try and familiarize myself with the layout of the house. This also allowed me the opportunity to give an educated guess as to where exactly the lamp I wanted was located. Judging from the photos I had seen, I narrowed down the location and once the door opened I made a bee line to the sun room. Just as I thought, the lamp was there waiting for me. I quickly grabbed the price tag claiming the lamp as mine and moved on to other areas of the house.
There were a ton of things that interested me, but only one item other than the lamp had a price tag that REALLY interested me. That item was a vintage Bertoia designed, wire side chair for $10. This happened to be sitting outside in the corner of the porch so I missed it at first. When I finally saw it, I quickly headed outside and was politely following behind an elderly woman who was remarking to her daughter how pretty the flowers were. No competition, right? Wrong. She slowly made her way up the steps of the porch and gave a curious look at the chair. Being a gentleman and not wanting to be a cut throat estate sale attendee, I resisted my urge to jump in front of her and grab the chair. I should have gone with my gut, because upon reaching the chair the woman turned to me and said "Well, I don't really like it but I suppose I have to buy something since I came out this way and this is so cheap." Damn. I tried to explain to the woman that I actually was buying the chair for an actual reason, but she was having none of it. She grasped the chair and reconvened with her daughter who also happened to be buying an outdoor chair, the plastic variety with flower stickers on it. Yay for them. Sense the sarcasm?
Anyway, feeling frustrated, I headed back inside to look over the rest of the items available. As you would suspect, the prices were all too high for me so I left them behind and planned on returning in the following days, hopeful that they would still remain and I could pick them up at a discounted price. Yeah, that didn't happen. They were either gone later that afternoon or first thing on the second day. Oh well. 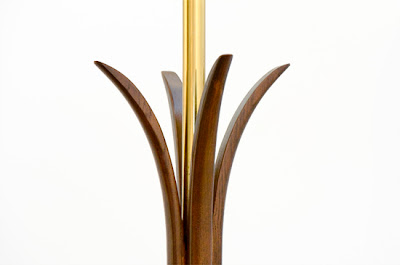 I still got my lamp and I was very pleased about it. There were a number of other people interested in it at the sale and I could sense they were disappointed and slightly annoyed that the outsider came away with it. Though I couldn't find any discernible marks that attribute it to a particular maker or designer, I still had a good feeling about the higher than normal purchase because it was a piece that is hard to come by in Tulsa, Oklahoma. The shape is obviously reminiscent of a tulip with four leaves that undulates upward in a flowing motion. A golden rod rises through the middle of the leaves up to the light socket which has a milk glass diffuser that the classic 50s shade rests upon. With this piece being 5 feet tall and solid wood, I left my first morning estate sale pleased with the experience and a bit lucky to have not been strung up by the regulars. The experience is a little less daunting now that I done it before, so who knows, I may try it again. Maybe.
The sad part of the story is that while I love this lamp, especially after I got it home and cleaned up, we decided that its color and 50s style stands out against our other decor more than we anticipated. So it pains me to say that we will be parting with it. Hopefully the next buyer will have as much admiration for this piece as I do and it will find a happy home where it not only fits in, but is allowed to shine. (Pun somewhat intended?) It's a fantastic lamp and in near pristine condition so whoever ends up with it will be one lucky guy or gal.
If you think you are that person, leave a comment below or drop us an email at info@ohmymod.net
P.S. - If you have any insight as to who this lamp can be attributed to we'd love to hear from you on that front as well. I've come across a number of tulip style lamps in my research but none of this size or exact build.
Posted by OH MY MOD at 5:58 AM