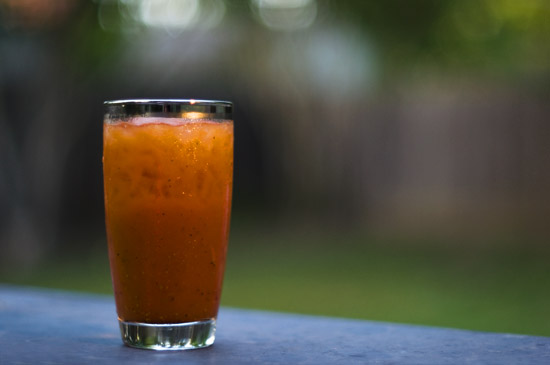 If there's one thing that can be said for us Americans, it's that we love to find ways to make our lives easier. Case in point: the Crock Pot. What's better than a device that allows you to throw anything and everything in it, walk away, and then come back a few hours with a complete meal? Other than a Bloody Mary, not a whole lot. Since it's been approximately 120 degrees for a couple of weeks now, we've been looking for any excuse to pull out the old slow cooker, and the holiday weekend provided the perfect opportunity to try out a recipe for 40 Clove Garlic Chicken that we saw on Pinterest. Pair that with an ice cold cocktail and you can't go wrong. 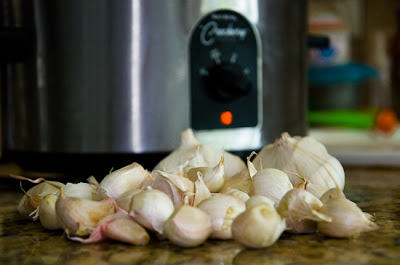 As far as slow cooker recipes go, this one required a relatively small amount of prep work (as compared to last weekend when we made this Chicken Tikka Masala in the Crock Pot. Aside from peeling 40 cloves of garlic -- which, I will admit, is a fairly lengthy task -- all you have to do is saute the cloves, add in white wine and reduce, and then toss it in with the chicken in the Crock Pot and sprinkle your spices over everything.

Before the miraculous act of slow cooking took place, everything looked like below. I snapped a shot of everything once it was all prepared, but to be honest, it wasn't the most fabulous looking. However, it was tasty! We'll probably tweak things a bit next time (and maybe try the original recipe, which is for the oven, once things cool down). 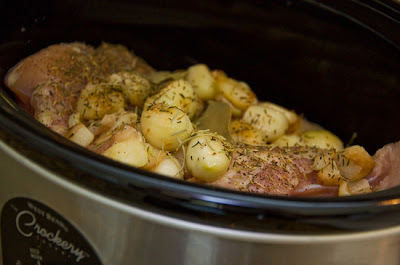