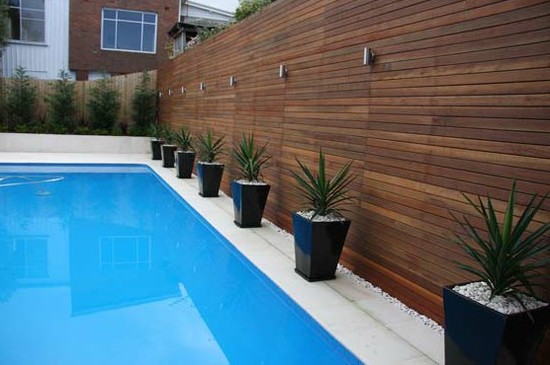 (Photo seen via Plastolux)
As I write this post, poor little Rylee is silently weeping at the fact that his most favorite element of our house -- the busted front fence and gate -- is on the hit list for DIY projects this summer/fall. As a perpetual jail breaker, Rylee has a sixth sense about when the gate hasn't been latched or when it could possibly have blown open. Seriously, if we happen to realize that the gate may be ajar, and we open the back door and shout, "Rylee!" he can tell by the tone of our voice that the gate is open and bolts furiously toward that side of the house. Needless to say, the sad state of our current front fence has led to countless darts down the street while yelling like a terrified parent. Because of this, we've been talking pretty much since we moved in about how we would love to rebuild the fence -- you know, because some lame pre-made panels just won't fit the bill at our residence. Luckily, fences are one of those areas where both L and I agree on the style, and it can and will only be horizontal. We had originally planned to tackle the project this summer, but somehow 110 degree heat and rock hard soil makes outdoor activities somewhat unappealing. However, since we're trying to be better planners here at Oh My Mod, we have done some rough estimates on the supplies we will need and how much they will cost us. 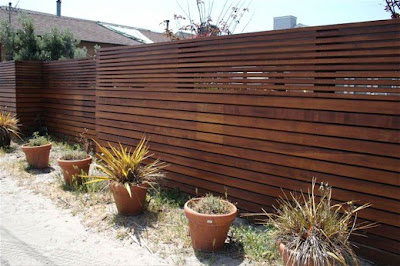 To begin, we priced out 1x2, 1x4, and 1x6 boards. We're still not set on which width we will use, but we're leaning toward using all 1x4s. In looking at examples of horizontal fences both online and in some fence books we've seen in stores or picked up, there are a multitude of options when it comes to design: all super wide, all super thin, a pattern of widths throughout, a medium or wide bottom with a topper of thin boards (example seen via Pinterest). In my opinion, while fences that utilize a varied pattern look nice (above photo seen via Pinterest), it's just a little too busy for our taste (although I will say the medium on bottom and thin on top looks pretty awesome). And since the super wide (think 1x6 or maybe 1x8) can sometimes turn out looking a little traditional, we've only really considered using 1x2s and 1x4s. Here's the cost break-down per our Home Depot estimates from earlier this spring (the section we're looking to rebuild is 6' tall and about 16' long):

While we're still not completely sure we'll go with the 1x4, its lower cost is definitely pushing us in that direction. We're hoping to find a coupon for at least 10% to help out with the costs, especially since we'll have to purchase concrete, hardware, stain, etc in order to complete the project (in total we're hoping to spend around $300 on things). We definitely plan to tackle this project once things cool down, so expect more in a few weeks. Until then, we're hoping to avoid any early morning panicked man/doghunts.
Posted by OH MY MOD at 4:55 PM