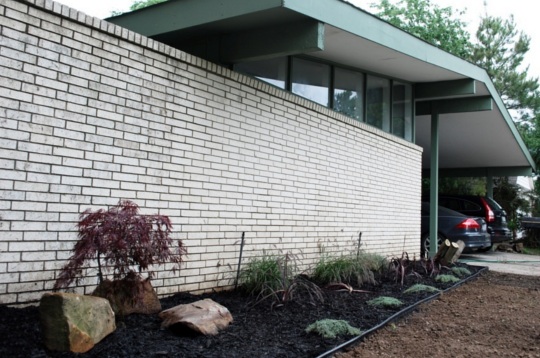 This weekend was absorbed by a task that actually brings in money -- you know, rather than it just going out -- so house related activities were kept to a minimum. That is, however, except for a fairly exciting occurrence on Saturday. As you can see from the photo above, we were left with the remnants of the overgrown tree that blocked the front of the house after we tackled our big front yard re-do last summer (this photo was taken that day, so it's a little out-dated). While L managed to wield the chainsaw quite successfully to cut down the vast majority of the tree, we weren't able to get any closer due to the fact that the back flow system to our non-functioning sprinkler system was fairly close to the stumps. Adding to the stumpiness of our front yard was the remnants of a massive tree that apparently split and died several years before we moved in. We had contemplated tackling these projects last summer when our neighbor offered to go halvsies on a stump grinder, but we ended up never getting around to it. 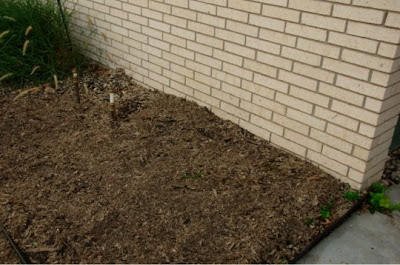 So, after over a year of procrastinating on finishing this project, we finally lucked out on Saturday when a guy driving down the street stopped and offered to do the work for us for only $60 -- $40 for the stump in the yard and $20 for the tree in the front bed. I can't remember exactly how much it would have cost us to rent the stump grinder with our neighbor, but I'm thinking it was between $35 and $50. And we would have had to do the work ourselves! So, with this information in hand, we decided to spring for it and pay someone else to do our dirty work. 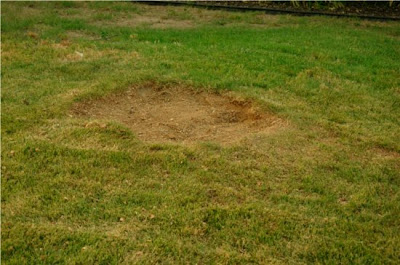 The entire process took about 20 minutes total, but I have to say it was definitely worth having someone do this for us -- seriously, there was no remorseful groan of, "Well I could have done that!" following the process, especially since I'm 99% positive neither L or I were up for operating such a big piece of machinery (check this out for an idea of what I'm talking about).

What was formerly a set of three stumps each about 1 1/2' tall became a pile of chips (see the top photo), and the annoying stump in the middle of the yard became a hole which we have now filled with dirt (there were wood chips too, but I raked them up so we could add in new soil and re-seed). So, in the end, we're pretty psyched that "we" finally tackled a project that was in desperate need of being done. We would definitely recommend paying someone to do this type of job for you if you aren't ready to take on such a heavy task -- especially if your stumps are located near things like water lines. We have a few smaller stumps in the backyard that are driving us crazy, but I'm thinking we might go the route of liquid stump killer (although, to be honest, we haven't actually done any research on this).
Posted by OH MY MOD at 5:46 PM