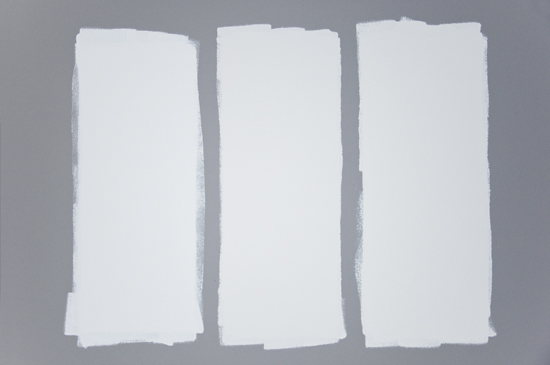 We're officially terrible bloggers. In fact, we're so terrible, we're just now posting about something that happened almost two months ago. Remember long, long ago when we said we had plans for changing the living room color? Well, it's been done - in fact, it was my birthday present to myself. Literally. I woke up and said, "L, we're painting the living room today and it's happening because it's my birthday and we do what I say on my birthday." Mind you, it wasn't really a "today" type task - a 15x30 room with 11' ceilings does not make for a simple task. Achieving a cleaner, more modern living area with such a large space can be tough. But, as the pic illustrates, we decided a good place to start was by opting for a more stark palette to simplify things. 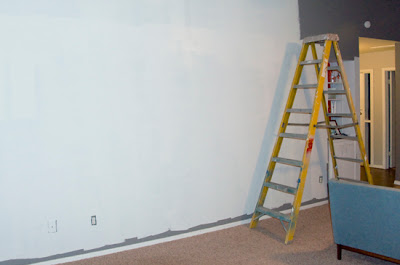 After much deliberating, cussing, and discussing, we decided to go with the white on the far right. To be honest, I was really pulling for the middle option (I am the middle child after all), and L was really hoping to talk me into the whitey whiteness of the swatch on the left. Since neither of us was willing to go with the other's option, we decided to compromise on the third.

The pic above shows how dramatic the difference between the old color and the new color is. Compared to our previous shade - Behr's Creek Bend - the new color (Behr's Polished) looks very white in the picture. In all actuality, it is a very, very, very pale gray. While L wishes it were a bit more bright of a white, I love that it has some color to it, while still having the cleanliness of white. 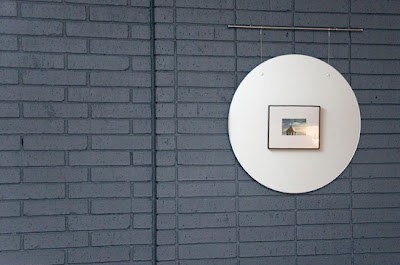 Lighter walls are fine and good when it comes to modernizing your living room, but they aren't quite as effective if the focal point of your room gets lost in the white space. So what else did we decide to tackle for my birthday? The fireplace. With the walls originally being gray and the fireplace a white-ish color, the newly painted walls called for a dark fireplace to create contrast within the room. In all honesty, even though the brick surround isn't that large, this was the worst part of the project. And things were made even worse when we decided that our initial choice was a tad too dark. Note to any future brick painters - a spray gun would make getting in between bricks and all of their little crevices much easier than a paintbrush and those cheap little sponges at Home Depot. Regardless, after much effort, our fireplace is painted and the living room has a cleaner, crisper modern look. 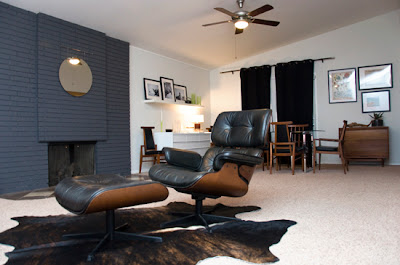 We're pretty psyched about the "finished" product - the grayish white provides a much better slate for everything, which means our furniture and everything else in the room doesn't have to fight with the color of the wall.

Since this is part one in our series of, "We're Terrible Bloggers and Have a Lot to Catch Up On," stay tuned for the BIG change in the living room.

PS - Did we mention we picked up that awesome cowhide rug for only $99 at Sam's Club? Thanks to our lovely fam for calling us and letting us know they were on sale and offering to buy us one for our early Christmas. Also, check out the beautiful black lounge chair and the awesome cabinet in the background. Seriously, these things are like our children. Only much cheaper.
Posted by OH MY MOD at 6:29 AM