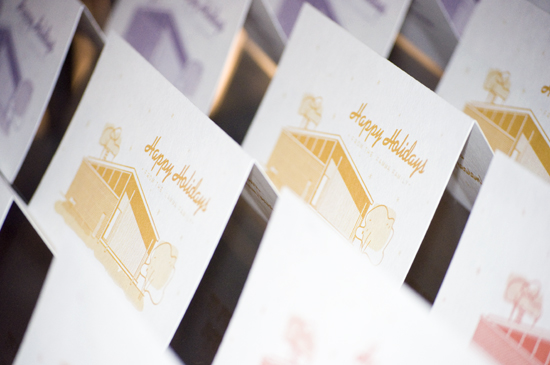 Ahh yes, the holidays are upon us. We all love the holidays, right? It's that special time of year where moms, dads, husbands and wives scurry through the streets and shops searching for the must-have gift of the year so they can express their appreciation to friends, family members and general acquaintances. Good times for all, right? Well, almost all. The holiday season is also the time for procrastinators such as myself drive to ourselves mad by putting these heartfelt decisions off until "tomorrow". This undoubtedly leads to excessive amounts of stress, indecision and in some cases loss of hair and/or appetite. As you might expect, I am once again tip-toeing the line of procrastination on another fairly common holiday task. What might that be you ask? Well I'm talking about greeting cards of course. A bit of back story for you. Prior to K and I's nuptials, I never partook in creating or sending out holiday greeting cards. I had nothing against them really, I just didn't have enough time or initiative to deal with them. Did I mention I procrastinate? Right. So fast forward to 2010 and K during a nightly discussion, K and I decide that we will send out our first holiday themed card to friends and family across the world since that is the mature, grown-up thing to do. With K behind me, procrastination simply would not do here. There was no "tomorrow", only "today". So, with her gentle nudging I began to explore possible options for our first greeting card. Being a designer, the store bought variety simply would not do. Neither would the uber-glossy Kodak created monstrosities you find in your local Target, Walgreens, Walmart, etc. No, if we were going to do this it needed to be something a bit more personal. Something that was a better representation of us and our style. After a bit of brainstorming and more discussions with the wife, I had focused in on an idea and went to work. This idea of course was to pay homage to our first home by creating a throw-back/retro themed card with a 50's style illustration of the front of the house.
I studied a number of 1950s and 1960s advertisements to get a better idea of the illustration style I had in mind. I collected a number of samples for reference, began sketching the general layout and then moved on to my computer. Though I am a designer, I have never been a huge fan of illustration so I wasn't quite sure how things were going to turn out. The process rough at first but after an hour or so things were starting to take shape and I found myself quite pleased with the direction of the design. 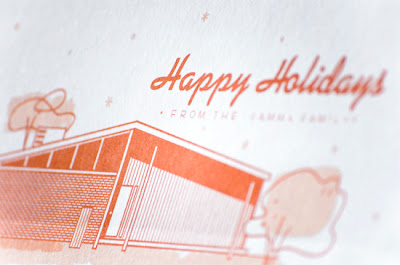 After the design was completed, I went out in search of paper to print on. I had a ton of options in mind, but decided that I probably didn't have the time or money to spend on a specially spec'd paper stock. To keep things easy and frugal, I hit up a local craft store and started thumbing through the general paper stocks they had on hand. I explored linens, classic laid and an assortment of other papers but nothing quite fit. Everything seems to finished, bright and new. I wanted something with a bit more tooth, weight and texture so that it would be nicer to the touch. In all honesty, I found myself designing the front and interior of the card with letter pressing in mind, but I knew then and afterwards that we didn't have the time or money to go that route. It was the thoughts of letter pressing that led me to the eventual paper choice. Watercolor paper. It met all the requirements. Readily available? Check? Vintage-friendly look and feel? Check? Super cheap? Check. 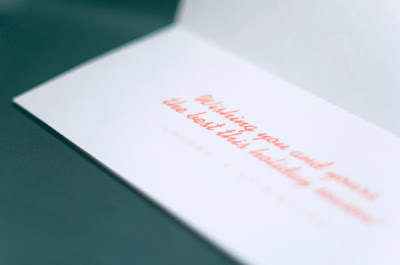 So I loaded up the paper and moved on to the search for envelopes. We were lucky to find a couple boxes of linen envelopes on clearance at a local office store pretty quickly so we had everything we needed to complete the cards. Once home, I put the finishing touches on the interior and exterior of the card then made a number of color variations pulled from my retro color palette. I prepped the files and began printing card after card, envelope after envelope. After each card was printed we made a list of recipients and matched them up with a particular color of card. After that, I printed color coded envelopes with the recipient's name and a general greeting on the back flap.
We didn't do a huge batch (a little over 30 in total) but we wanted to keep the number down so that I didn't go crazy printing, cutting, scoring and stuffing these cards. After all, I wouldn't want to totally burn out on the experience on the first attempt. In the end, we were pretty pleased with how things turned out. Our first holiday card represented both us and our home the way we wanted and for that we couldn't have been happier. This year we hope to achieve the same kind of result, but as I hinted earlier on, the procrastinator in me has prevented that from happening. I guess I'll just do it "tomorrow".
What say you MODerators? Any tales of creating your own holiday themed cards?
Posted by OH MY MOD at 9:10 PM